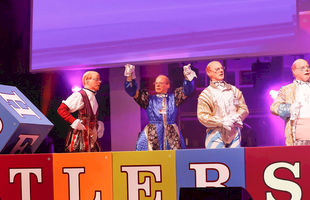 Theater between the audience

Mr. Image Theater creates an unprecedented original mask theater that comes to life through direct contact with the audience. The characters of Mr. Image fascinate, intrigue and make people laugh - wherever they appear. Combining his strong theater background and years of experience in theater making with the expertise in special FX techniques, Mr. Image has its own productions and unique custom formats, and also works on commission.

In our repertoire you will find a special interpretation for your event or a festival. Our offer varies from humorous interactive theater between the audience to a full evening program or a complete performance.

Mr. Image group was founded in 1995 by theater makers, artists and performers / dancers Iva & Petar Mandick, when the two artists - already known for their extraordinary mask and dance theater productions - decided to literally bring their theater between the audience. Over the years they have created a new form of contemporary interactive mask theater characterized by masterful use of unique lifelike masks combined with their own humorous style that appeals to a wide audience. With hundreds of performances at festivals, and at public and corporate events of national and international organizations and companies, Mr. Image has grown into a widely appreciated act in the field of visual interactive theater in the Netherlands and abroad.

There are no reviews about Mr. Image Theater (yet). Are you the first to share one?

To like Mr. Image Theater, you must first login.