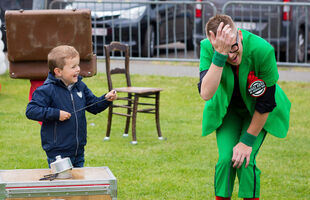 Gekke Jorre is not a typical clown, balloon pleater or magical magician, but a contemporary family entertainer.

WHAT YOU CAN EXPECT FROM ME? LAUGH, GATHER, ROAR, you know it…

My animation shows are performances in which laughter and enjoyment are central. Let's call these shows modern magic shows , with lots of variety and visual comedy as a guideline.

The type that Gekke Jorre is now, became for me a unique mix of what I like to do.

Laughing and having fun is simply a must in these crazy times.

Imitating voices and playing skits by famous artists, that's where it all started. Jorre taught himself to ride a unicycle in one evening, then he took the step to train in a circus school . After many flying hours, he flew to the magic club to delve into the art of magic.

Jorre has been a member of the Kids Entertainer Academy for several years now, an international academy of like-minded children's entertainers.

Jorre is constantly innovating and working on his material. All free time goes to studying new techniques, magic tricks and decorating his material and decor.

It seems like a street without end, but if necessary to be able and allowed to stand in front of an audience with a good feeling.

Crazy Jorre is a born (child) entertainer! All the children (both 4 and 9 year olds) had a lot of laughs and so did the family. He knows how to respond well to the audience and takes into account "unexpected" circumstances that may occur (eg distracted children because a butterfly suddenly flies by :)). The balloon artworks he makes afterwards are a good addition to his show itself. Recommended!

Thank you Ellen for these beautiful words. I'm glad to hear that you enjoyed the animation.
Thank you for your warm welcome and the trust you have placed in me.😉

Thank you for these beautiful words. It was a pleasure to do this for you.
I can still see the smiling faces before me.😉

Fantastic animation at our company party

Crazy Jorre and his colleague are a fantastic asset to your party or event! Everything was well arranged, they are both very friendly, helpful and correct. The animations were great, rarely seen such beautiful balloons fold! Also the magician was great, both for the kids and the adults. Definitely recommended and for our next party definitely someone we will invite back.

Wow, nice to read that Anuschka. Thanks for the nice words.
Glad we were able to reinforce your staff party.

Thank you for your warm welcome and the good care.
We are already looking forward to the next opportunity.😉

a crazy afternoon, heartwarming humor and a touch of magic. Crazy Jorre knew how to take our children into the world of magic with his charms, from making jokes to crazy games. I must confess that we were mainly looking for entertainment for the children, but Jorre could make many adults laugh.
in any case, Thiago is super enthusiastic and happy, then we as grandparents are so satisfied :)

Thank you for the nice words Anja. It was nice to be able to do this for your enthusiastic group. Thiago was indeed visibly enjoying the attention.

I know Jorre very well from work, so I was sometimes curious about what he did after work. I had already heard many nice things about this and if my daughter Nova made her communion I thought this is the time to see Jorre in a different way. And I don't regret it for a moment it was AMAZING. Everyone at the party was very excited. Crazy Jorre is for both small children and the big children 😉 if you are still looking for a nice entertainer for young and old I would say contact Crazy Jorre 🥳

Thank you for these nice words Shari.🙏

Nice to hear that both young and old enjoyed it. Thank you for your hospitality and it was a pleasure to be there.😉

An added value for your children's party

Crazy Jorre came, saw and conquered. The children were captivated from the first moment by his animation show, magic tricks and ballooning skills. Recommended. The kids spoke of the best party ever. Thank you!

Thank you Melissa. These beautiful words are of course very rewarding. Nice to hear that the kids enjoyed it and are still talking about it.

Fantastic show for young and old!

Crazy Jorre came by at our daughter's communion party and made it an unforgettable show.
A full hour of entertainment for young and old. Both large and small stood in amazement.
Funny for the little ones among us but also laughing for the adults.
An unforgettable experience that was talked about for a long time to come.

When organizing our first Kids Day 2 years ago, we were looking for an animator. We wanted to avoid a typical clown, and soon we arrived at Gekke Jorre. Hiring him was a great idea, we couldn't have done better! His enthusiasm, his humor that is genuinely funny, and his professionalism made this day a great day. The smiling faces of the children were the icing on the cake. So this year we contacted him again and it was a successful day too!

It is very nice to see that people come back to us after a successful edition. It was again a nice day with your enthusiastic employees and customers.

Thank you for the trust and we look forward to seeing you next time.😉

The kids got entertainment and magic in 1 show. It was for Crazy Jorre
a challenge to comply with the corona measures within his show.
Honestly, he integrated this in a really good way. Super fun show!

Thank you for these nice words Eve.

It was a pleasure to be able to do this and to entertain the families present during your Skoebidoe weekend in Massembre.

On October 4 we enjoyed a great magic show by Gekke Jorre. In the audience were the students of the 6th grade, school Wegwijs Halen, but also family of classmate Matteo.
After all, on this day, October 4, it was 3 years ago that we had to say goodbye to Matteo. Matteo was very fond of magic. That is why Master Ben asked Gekke Jorre to think back to our son with a positive (magic) note. This must not have been an easy task for Gekke Jorre, but he did a great job. I never thought there could be so much laughter on such an emotional day. Besides his crazy wands, colored handkerchiefs, crazy dreams, ... our Matteo also got a place in his show.
Thank you Jorre for this beautiful and enchanted magic show and the sweet wink upwards.

Thank you very much for this valuable message and these beautiful words. I was really looking forward to this performance myself. That's why I'm glad that the performance created the right feeling. It was a heartwarming gathering and it was an honor for me to be able to do this.

Last Saturday we celebrated our 10th anniversary at Versmarkt de Wallys. Jorre made 2 beautiful balloon arches for this. These are really top quality because after almost a week they are still showing off in front of our store.

Nice to hear this Chris. I'm glad you found this to be an added value and that you were able to enjoy it for so long.

Congratulations again on your anniversary. Thank you very much for the trust and these beautiful words.

I had another crazy idea in my head to make my wedding hall pop into the early hours.
I contacted you with conviction to discuss the bright idea with me.
It immediately made me feel very happy and confidently I left my dream to you.
Woooowww what a beautiful effective you have enchanted above every table. The mouths fell open as soon as the balloons went on and so the dance party could be opened in an atmospheric way!!!

Hoping to another great collaboration :)

Thank you Kelly and Tom for the trust you placed in us to make this balloon decoration. A special idea indeed, but all the more fun when you see it become reality.

Thank you for this nice assignment and your enthusiasm.

Great day thanks to Jorre

Jorre is having a great time, your party with him is complete.
he makes a balloon for everyone. Does not matter what. He is an addition to your party.
Meij had family day of the company.
very successful

Thank you so much for these nice words Iris. It was a great pleasure to be a guest at TenneT, thank you for your warm welcome.