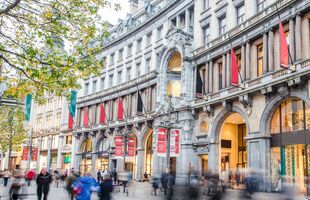 The Stadsfeestzaal: pearl in the Antwerp crown

Antwerp's famous Stadsfeestzaal has already had an eventful history. Today it is the place where 6.5 million people enjoy a unique shopping experience, in a beautifully restored environment that exudes luxurious grandeur. But originally the building served as a large party and exhibition hall.

Every Antwerp resident has great memories of the Stadsfeestzaal. The countless exhibitions, fairs, balls, school parties and Sinterklaas visits are etched in the collective memory of the city.

The construction of the Stadsfeestzaal started at the end of the 19th century. City architect Alexis Van Mechelen created the monumental building, which was festively inaugurated 8 years and 400,000 Belgian francs later. The Stadsfeestzaal opened its doors on 8 February 1908. In 1983 the building was officially recognized as a monument.

Its location in the heart of the Antwerp city center - right in the middle of the Meir - made the city festival hall a unique building. The rich architecture of this grand establishment appealed to the imagination of residents and visitors of the biscuit town from day one.

The test of time

Over the years, time took its toll. The building became outdated due to intensive use and laborious maintenance. In 2000, the city of Antwerp concluded an agreement with Multi Development to breathe new life into the city festival hall. This was part of a major revitalization of the Antwerp shopping circuit.

However, that did not go without a struggle. In December 2000, a fierce fire destroyed the entire city party hall. Only the monumental stairs, the historic facade and the steel roof construction remained. A long process of permit applications delayed the revival of the property.

A new life for an old monument

In 2004 light suddenly shone at the end of the tunnel. Multi Development acquired the project for the re-use of the Stadsfeestzaal and got to work immediately. What followed was a fine example of planning, vision, craftsmanship and intensive work.

In October 2007 the time had finally come. The renovated, glorious Shopping Stadsfeestzaal opened its doors to the public. It was the final piece of an integral shopping circuit in the city center. With quality housing facilities and a substantial extension of the parking space on top.

Until today Shopping Stadsfeestzaal is a glittering beacon in the heart of the city. A royal monument that every Antwerp citizen is rightly proud of.

There are no reviews about Shopping Stadsfeestzaal (yet). Are you the first to share one?

We event your story. 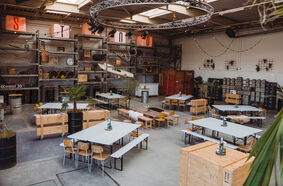 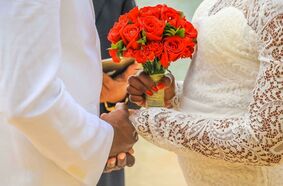 Weddings Roatan was founded in 2000, to provide bespoke wedding services in the Bay Islands, Honduras. Over the years, we have cultured a fantastic reputation and extensive network to offer our Clients the ultimate Caribbean destination wedding. 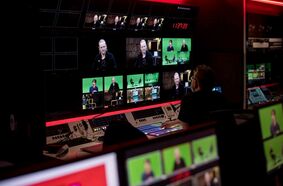